China is dramatically altering and effacing East Asian watershed areas in an attempt to feed itself enough water to keep its economy growing and its fractious state in tact. The political-foreign policy issues that a lack of water will promote are obvious. There is little doubt however that the media, along with the Chinese, will find succour in blaming 'markets'; 'globalization'; Co2 induced globaloneywarming; and of course America. Solutions would include a freer market, private capital projects, real price points for water costing and usage, technology to clean up and improve the existing sources of water; and stricter environmental rules on development and water usage. The remedies which will be embraced however, will entail bigger government projects and more watershed distortions, managed only by the state with public funds. This means more debt, no price points and centralized bureaucracies micromanaging local water resources. When it fails most likely the Chinese army will begin marching hither and thither throughout East Asia to secure what even climatemongers will admit is a chemical source necessary for life.

China’s current water crisis is driven by two primary factors. The first of these is China’s uneven distribution of water. Because of its large and diverse geography, China has a wide spectrum of terrains and climate zones. While southern and eastern China enjoy abundant rainfall, the northern and western regions of the country receive very little. This weather pattern can lead to unfortunate and seemingly contradictory effects, with some provinces battling floods while others are suffering from months-long droughts. Source 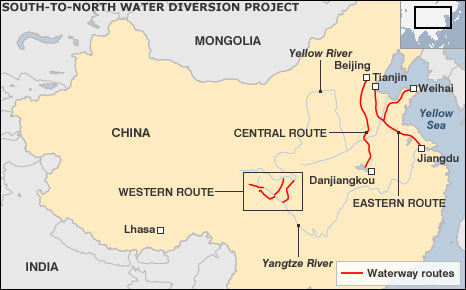 In the past, the Communist Party has reflexively turned to engineering projects to address water problems, and now it is reaching back to one of Mao’s unrealized plans: the $62 billion South-to-North Water Transfer Project to funnel more than 12 trillion gallons northward every year along three routes from the Yangtze River basin, where water is more abundant. The project, if fully built, would be completed in 2050. The eastern and central lines are already under construction; the western line, the most disputed because of environmental concerns, remains in the planning stages.

The North China Plain undoubtedly needs any water it can get. An economic powerhouse with more than 200 million people, it has limited rainfall and depends on groundwater for 60 percent of its supply. ....“There’s no uncertainty,” said Richard Evans, a hydrologist who has worked in China for two decades and has served as a consultant to the World Bank and China’s Ministry of Water Resources. “The rate of decline is very clear, very well documented. They will run out of groundwater if the current rate continues.” NYT Source

For too long, rivers - the main sources of water - have been abused. Diversion schemes for irrigating crops and dams for flood control, without careful planning, have in some cases reduced flows to a trickle, or worse. The Yellow River, at the heart of China's wheat- and maize-producing area, is a grim example - once one of China's main arteries, water flow now no longer reaches the sea on about 200 days of the year. Source

....Water quality of rivers flowing above ground is likewise severely degraded by pollution, with nearly 50% running black at grade 5 (not suitable for agriculture or industry). Since 2002, approximately 63 billion tons of wastewater flow into China’s rivers each year, of which 62% are pollutants from industrial sources, and 38% are poorly treated or raw sewage from municipalities [1]. Source

The Chinese economic 'miracle' has come at a high cost. Not planning around the basic material needed for life – water – has resulted in its depletion and misuse. If left uncorrected proper water sourcing will have a more important impact on the actions of the Chinese state then ideology, or concerns about world-power status. Without water your state will simply collapse.